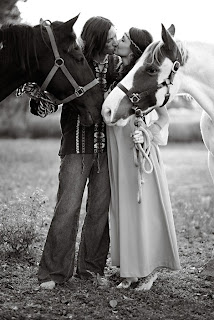 The 1960's was a decade that proved a major transition in fashions, spawning many styles that are still in relevant within current day designs. 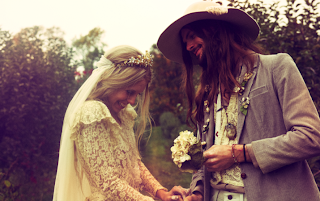 Black Pearl Weddings feel that as the British summer reaches its crescendo, this is a milestone in our history and culture that deserves reflection. In this weeks blog post, we will be considering the influences the decades social revolution has over weddings and fashion even today. 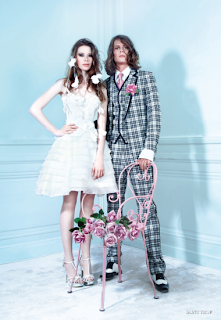 One of the first and main aspects of the 1960's that comes to mind is the "Hippy" movement. The principles that drove forward this movement include "Non-conformism", "Flower Power", "Free-spiritedness" and "Spreading love and peace", all of which will strike a chord to some extent with those planning their wedding. These principles can prove a strong guidance in styling your wedding, in that it encourages individuality and unique styling, whilst remembering that the day is a celebration of the love shared between two people, and the love others have for the happy couple.

In keeping with the social beliefs of this era, outdoor weddings can easily incorporate and reflect the love of our natural environment, as appreciated with tree hugging, self sufficiency and the use of tents and the forever classic VW Campervan, the 1960's offers a wealth of inspiration for gorgeous outdoor ceremonies and festival-esque reception parties that will be impressive and enjoyable by any standards. 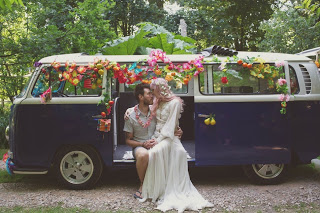 It would be impossible not to reminisce the music scene of the 1960's, with some of the most memorable acts in the last century peaking during what was a seminal era for the global music scene. With acts such as the Beatles, Jimi Hendrix, the Rolling Stones, the Beach Boys or of course the unforgettable Glastonbury and Woodstock festivals, the list of artists can continue for hours. A huge amount of the current music scene is still influenced by these artists, and with an almost endless array of tribute acts, it is easy to garner inspiration for your wedding music to really enhance the happy and loving atmosphere. 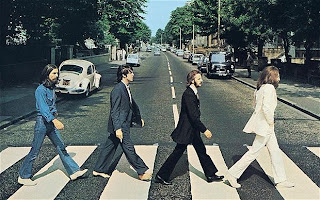 Equally, it was at that time that the world became more inclined towards vegetarianism and veganism, another aspect of the Hippy lifestyle. Some cuisine of the highest calibre is produced by and for vegetarians, with famous chefs such as Yotam Ottolenghi, Jamie Oliver, Nigella Lawson or Hugh Fearnley-Whittingstall proudly producing sumptuous dishes that would have been celebrated throughout the 60's. One huge advantage of selecting vegetarian cuisine is that it's pallatability is suitable for everyone, and some of the greatest imaginable flavours can be created without the use of meats.

And finally, it would be utterly impossible to appreciate the nostalgic influence of the 60's, without paying our credence to the enduring advancements in fashions. It was at this time that the world was introduced to the legendary photographer David Bailey, photographer to the fashion industry ad stars of the time, among his interests, who helped to truly revolutionise the methodology of styling photo shoots. 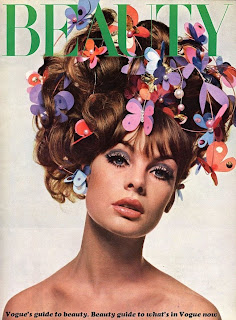 At the forefront of the fashion revolution were designers including the esteemed Mary Quant, Pierre Cardin, John Rocha, and Barbara Hulanicki, famed for pioneering mini skirts, flares, flowing dresses and skirts, headbands, and using beads to embroider or as an accessory. Neatly trimmed and flat outfits with lavish displays of bold colours became increasingly popular, as did flat shoes and kitten heels. The pervasive influence of this use of colour and at the time revolutionary style and shape of clothing still inspire designers season after season.